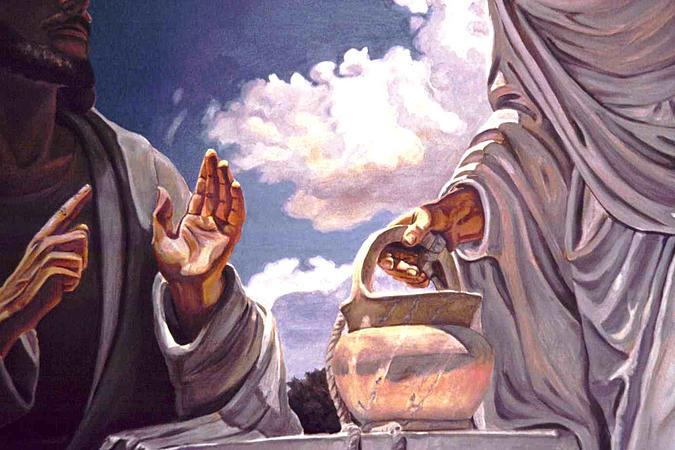 There is an awesome event recorded by John in chapter four of his book (please go through and read the entire chapter as I will only highlight a few points.) It tells of an unusual encounter of a Jewish man (Jesus) and a Samaritan woman. You see, Jews and Samaritans weren’t the best of friends. To provide a bit of historical background as to why the Jews and Samaritans weren’t too fond of each other, I’d like to quote a translator’s note from the New English Translation bible (NET) for John 4:4:

“The Samaritans were descendants of 2 groups: (1) The remnant of native Israelites who were not deported after the fall of the Northern Kingdom in 722 b.c.; (2) Foreign colonists brought in from Babylonia and Media by the Assyrian conquerors to settle the land with inhabitants who would be loyal to Assyria. There was theological opposition between the Samaritans and the Jews because the former refused to worship in Jerusalem. After the exile the Samaritans put obstacles in the way of the Jewish restoration of Jerusalem, and in the 2nd century b.c. the Samaritans helped the Syrians in their wars against the Jews. In 128 b.c. the Jewish high priest retaliated and burned the Samaritan temple on Mount Gerizim.”

Once the Samaritan woman is confused as to why Jesus is even speaking to her and asking to share, He begins to speak of a living water. (NET translator’s note: The word translated ‘living’ is used in Greek of flowing water, which leads to the woman’s misunderstanding in the following verse. She thought Jesus was referring to some unknown source of drinkable water.) Her being confused in her physical thinking, she asks where she can draw this water. Jesus responds in verses 13-15:

The Greek verb translated ‘springing up’ denotes the action of leaping or jumping. A fountain is a device or structure that sends a stream of water into the air (Merriam-Webster). This spiritual water is to become a continual flow inside of us that bubbles over! This Samaritan woman’s encounter with Jesus was so profound that she went away to go tell some people about Him and to bring them TO Him. We cannot let the woman’s response escape our attention. When she found out that Jesus was the Christ, she left her water jar and ran off into town and told the people, “Come see a man..” It says that just because of her, many believed. And when they came to meet Jesus, He stayed with them two days and more believed. There is an awesome pattern to catch in this. There was a barrier that was broken down, a spiritual revelation, and a revealing of the Lord which caused this woman to forget about her social status to proclaim “good news.” And because of this woman, the Samaritans said to her, “No longer do we believe because of your words, for we have heard for ourselves, and we know that this one really is the Savior of the world” (v.42). What irony! The Jews would betray Jesus, a fellow Jew, rejecting Him as the Messiah, but the outsiders, the so-called enemies, were the ones to recognize Him not only as the Messiah, but as the “Savior of the world!”

When the disciples came back and was trying to get Jesus to eat the food they brought, He responded:

“My food is to do the will of the one who sent me and to complete his work. Don’t you say, ‘There are four more months and then comes the harvest?’ I tell you, look up and see that the fields are already white for harvest!” (vs.34-35)

As believers, we are God’s representatives. We should not be so focused on fancy church clothes and church services creating doctrinal legalisms and religious practices that belittle others that we lose sight of the mission which is to gather the harvest! We can get so “frustrated” because of all the “bad things” we see around us, because we may be the only “Christian” on our jobs, etc., but Jesus is saying that “the fields are ripe with harvest. These are perfect opportunities to “let your light shine before people, so that they can see your good deeds and give honor to your Father in heaven” (Matthew 5:16). Going to church isn’t enough. Going to heaven is not the bare minimum. We should strive to do the will of the Father. And that is to represent Him in the earth and to gather His harvest.

“Then he said to his disciples, “The harvest is plentiful, but the workers are few. Therefore ask the Lord of the harvest to send out workers into his harvest.” (Matthew 9:37-38)

Wow I loved this!!! I am struggling with something at work and was reading and praying. I would find myself getting frustrated because some people just didn’t have a heart for change or humility. But this blessed me. I have to continue to walk in the ways of the Lord and let his light shine through me. I am there for a reason. Awesome blog.